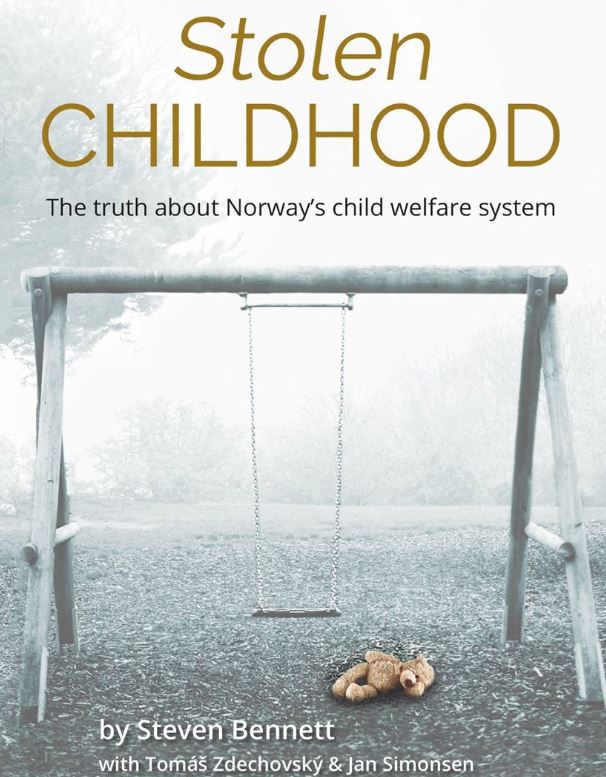 6. april 2019 / irene.hov / 1 kommentar
«Hopefully this book will shine a light into the dark places in which many children and families are currently finding themselves.»
Gro Hillestad-Thune

Stolen Childhood av Steven Bennett ble utgitt 3 april 2019 og handler om norsk barnevern. Medvirkende er journalist Jan Simonsen og forord er skrevet av menneskerettsadvokat Gro Hillestad Thune. Hun er vår fremste ekspert på området og har vært dommer i menneskerettsdomstolen i Strasbourg i 17 år.
Med bidrag fra barn, foreldre, advokater, psykologer, psykiatere, helsepersonell, arbeidstakere, utdanningspersonell, pleiepersonell, leger, politikere, menneskerettighetsaktivister og fra kunst og underholdningsindustrien, får leserne et vindu inn i dagens norske barnevernsystem og praksis.
This book is for anyone who is concerned about the violation of children’s rights. Featuring commentary from prominent Norwegian lawyers, psychologists, medical professionals and teachers, the practices revealed in these pages will shock you to the core. Stolen Childhood tells the terrifying stories of families who have had their children removed by Norway’s child welfare service (NCWS). The book shines a light on the questionable motives behind the emergency takeovers that are destroying so many lives, which often lead to abuse, relationship breakdown, addiction and even suicide. It explores the ideology that has given NCWS such power and the cultural conditions that enable it to act without accountability. Join the thousands of people around the world who are standing up against this hidden scandal. It’s time to tell NCWS that enough is enough, to demand that our children be set free. “An important book that proves there is a case for Norway to answer.” Preben Kløvfjell, lawyer “We need to remove the blinkers and stop needlessly putting families through terrifying trials that lead to disastrous consequences for children and their families.” Berit Aarset, nurse and leader of Human Rights Alert – Norway“Well researched, intensive and alarming.” Dr. Chris Prunean

This book is a wake-up calk The children of Norway need a welfare service that works in their favour; a service that treats them with the respect they deserve. Unfortunately, the current child welfare system (NCWS) does not fit this description. Respecting children’s rights in theory is of no worth if their rights are not respected in practice.
Alarm bells providing warning after warning have been sounded at the highest level in the Norwegian government, but still our politicians do not act. The lack of concern from the Norwegian media, organisations working to protect children, human rights organisations, other professionals and the general public is shameful.
It is rather shocking that there is no interest in or demand for basic facts to back up the strong and persistent criticism of NCWS. Hopefully this book will shine a light into the dark places in which many children and families are currently finding themselves.
Children are suffering as a result of this dysfunctional system. Some are taken away from their families for no legitimate reason, while others who really need help are either actively ignored or go unnoticed. In far too many cases there is a lack of respect for children’s needs,
and the harsh way in which children are removed from their families causes unnecessary childhood trauma.
I am very concerned for the children who are suffering; not just from trauma in the aftermath of being taken away, but also from the abuse they experience in care. A child should be protected, kept safe and made to feel secure. Under the current regime, NCWS‘ focus is on
inspecting parents and the quality of their parenting skills. Children are overlooked in this process and are not treated like human beings by the system.
I recommend Stolen Childhood to anyone who is interested in or concerned about our obligation to respect and comply with children‘s basic human rights, not only in theory, but also in practice. What we need is a safe, competent and child–respecting child welfare service.
This book is dedicated to the children of Norway.